Recently I had an opportunity to visit Mysore in India. Mysore is the second largest city of Karnataka State and is about 120 kilometers from Bangalore, the Silicon Valley of India. It is well known for its palaces, the famous ‘Dasara’ festival , silk sarees and unique style of painting. Not to forget the sweet delicacy ‘Mysore pak’.

Every year I conduct an advanced course on organic/biodynamic agriculture at BASIL Academy, Mysore (www.basilacademy.in) for the organizations and people who are already pursuing organic farming. The aim is to go beyond the traditional inputs like composts and bio-pesticides to more potent preparations and innovative approaches which can enhance the quality and quantity of the produce. I enjoy sharing the technical knowledge and practices  to falsifies the general perception on organic agriculture as low yielding farming system.

During the advanced course I could interact with three participants Mr. Hari, Mr. Giri and Mr. Murthy who were fully devoted to organic agriculture and wanted to do things differently in this sector. They were part of an organization ‘Nesara’ (meaning rising sun) which markets organic produce in Mysore. Infact, Nesara is a platform that links the small  organic farmers in an around Mysore to market their produce. Their concept of marketing is akin to ‘Mindful Marketing’.

Mindfulness is an important concept which is core to the Buddhist philosophy. It’s a process of increasing awareness of oneself and the surroundings to induce the divine qualities of a human being. How can mindfulness be linked to marketing? We all know that marketing is all about making long lasting and positive connection with ones client or customer. On the other hand ‘Mindful marketing’ is a conscious effort to market a produce whereby the seller does not squeeze the producer on price of the commodity rather understands the difficulties involved in the production process and acts accordingly with compassion and cooperation. In other words the producer (here farmer) decides on the price of the commodity which is intended for sale unlike the market fixing the price of commodities. It is a unique concept which may not fit into the corporate agribusiness but is apt for the small holder farmers who faces lot of difficulties for market access. 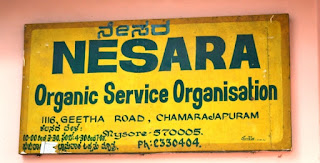 ‘Nesara’ adopts a similar strategy akin to ‘Mindful Marketing’. The first step Nesara undertakes is to create awareness amongst the small farmers around Mysore region who are interested to cultivate crops adopting organic agricultural practices. The interested farmers become members of Nesara with a nominal membership fees and use the outlet of Nesara for marketing their produce. The most important aspect is that the farmers fix the price for their produce depending on the cost of production plus a margin for a particular commodity. Nesara then markets the farmer’s products in their outlets. Another interesting factor is that, this marketing strategy is not driven by market forces rather farmers are free to produce in accordance to their choice, while the consumers had to plan their consumption accordingly. This is an excellent example for ‘food sovereignty’ wherein, farmers choose to produce the crops which is quite contradictory to the market driven production process.

It was during 1996-97, a group of people comprising Mr. Chandrashekar, Mr. Ravi Kumar  initiated a movement on safe food and organic agriculture in Mysore. Initially it started with marketing the farm produce of Mr. Chandrashekar and few active participating farmers during weekly meetings and awareness campaigns. Due to the demand for vegetables and other farm products which are not commonly seen in the market like the native or neglected vegetables, fruits and millets, it was felt that marketing of these products should be carried out on a large scale by involving more number of small farmers. At the same time the growing demand for organic and local produce transformed Nesara into an organization to link the farmers and consumers. A gradual transition happened from a weekly activity of interaction and farm produce sales to a fully fledged outlet marketing products that are produced and processed by farmers. People from Mysore city throng the organic shop to stock their vegetables, fruits, spices and other products.

Any farmer who wishes to utilise the Nesara platform has to become a member by paying one-time fees of Rupees 1000 (approximately USD 20). The perquisite is that the member farmer should be committed to cultivate crops by adopting organic agriculture practices. The farmers are inspected by the core members of Nesara by visiting the farmer’s field without any additional costs. This is to assure the consumers of the organic status of the produce i.e devoid of any agro-chemical residues. Since there are no certification costs and also middle-men involved in the supply chain the cost of organic produce is almost the same as the market price.

Future Plans
Plans are underway to introduce ‘food baskets’ which will be directly delivered to the door steps for interested consumers. This would help many consumers who are willing to go for healthy and organic food but may find it difficult to visit the outlet.  Shortly consumers would be able to place orders over phone, including dairy products, vegetables, fruits and the grocery which will be delivered at a reasonable cost.

Nesara had a rough ride initially; most of the problems faced during the early stages were more related to organizational restructuring and governance.  “It is the enthusiasm of the consumers which has kept us motivating and pushing to expand our activities and also to conduct several food exhibitions” says Mr. Giri, Secretary of Nesara.

Let’s wish Nesara to grow leaps and bounds and help the small farmers through market access while providing safe food to the consumers of Mysore. At the same time Nesara like organizations that adopt ‘mindful marketing’ strategies need to mushroom in the developing world where majority of the farming community are small holder farmers.
Posted by Dr.Thimmaiah at 12:44 AM