Bio-digestor: A Smart Low-cost Technology for Farmers
Agriculture is a source of livelihoods for 1.5 billion smallholders and landless laborers. The vast majority of the farmers in the developing countries (about 85%) are farming with land holdings with less than 2 hectares (ha). Moreover 75% of the rural poor of which 2.1 billion live on less than $ 2 per day and 880 million on less than $1 a day, and most depend on agriculture for their livelihoods. (World Bank, 2007). According to the findings of the Intergovernmental Panel for Climate Change (IPCC), climate change is anticipated to have severe effects on food security, environmental sustainability and equity, possibly increasing the number of hungry people from 100 million to 380 million by 2080 (Easterling et al. 2007). The International Assessment of Agricultural Knowledge (IAASTD) report stated that “the way the world grows its food will have to change radically to better serve the poor and hungry if the world is to cope with growing population and climate change while avoiding social breakdown and environmental collapse.” (IAASTD, 2008)
The use of fossil fuel in agriculture is very high in agriculture. About 10 calories of fossil energy is required to produce one calorie of food energy by the modern high input agriculture systems. With the Climate smart agriculture technologies the energy requirement can be reduced by 20 to 50 percent and if well designed even more. Reduction or elimination of fossil fuel use in agricultural production will soon be crucial in the fight against hunger in a world where fossil fuels are in short supply (Tim et. al., 2008).
Reducing the cost of production and transforming agriculture into sustainable, productive and profitable by low-cost technologies is the need of the hour. Amongst different technologies available, bio-digesters are low-cost and apt for the resource poor small farmers.
What are Bio-digestors?
Bio-digesters are waterproof containers made using bricks and cement to ferment the biomass like weeds and crop residues that are available in the farm to prepare liquid manures to address the crop nutrition and pest management of a variety of crops. This low cost technology not only reduces the cost of production but also empowers the small holder farmers. It can be constructed by an individual farmer or group of farmers in one village and can become even more economical. This technology is promoted in Bhutan by the National Organic Program (NoP) to support and facilitate the small holder farmers to reduce the cost of production by efficiently utilizing the local natural resources and build capacities of farming communities to produce all inputs on-farm.
The liquid manure that is produced by the bio-digester is very effective in addressing crop nutrition in organic agriculture. The solution is diluted in 10 parts of water and sprayed on the foliage of the crops. The solution can also be used through irrigation water and also linked to drip and sprinkler irrigation systems.
In crops wherein the pests are a major problem, traditional medicinal plants or weeds that have strong odour like, Argemone mexicana, Artemesia sp., Calotropis gigantea, Clitoria terneata, Croton sparsiflorus, Eupatorium sp., Gomphrena globosa, Leucas aspera, Lantana camara, Ocimum canum and Parthenium hysterophorus are very effective.

a.      to provide nutrients to crops by foliar sprays

b.      to protect crops from pests and diseases

c.       help to avoid the use of synthetic chemicals like fertilizers and pesticides.

d.      the local resources can be used efficiently

e.      helps to save costs in crop production

f.       the preparations are environmentally friendly and protects the beneficial organisms

g.      helps to use the local and traditional knowledge

h.      empowers the farmers to be self reliant

Climate smart agriculture technologies are regenerative as they restore nutrients and carbon in the soil, resulting in higher nutrient density in crops and increased yields resulting in improving the capacity of the farming systems.

If these regenerative climate smart farming practices are applied to all the world’s 3.5 billion tillable acres, close to 40 percent of all global CO2 emissions can be mitigated. In addition the farmers of the developed and developing world can be empowered by being least dependant on the transnational agribusiness companies for all the farming inputs.

Underutilized crops are those which are not in the mainstream food production like millets, local crops, native fruit crops etc.. Globally more than 80% of the food requirement is met by merely 15 crops. Woefully, emphasis on research and development programs is on the major 15 crops; research programs on breeding, agronomy, crop protection etc. Every variety of a crop throws a gamut of challenge to the scientists to find an appropriate answer and most of the solutions are short lived and static.

On the contrary there are nearly 7000 species of plants which don’t require the conventional technical agro-inputs; they just grow naturally by utilizing the natural resources.In the present climate change scenario, there is need to use the abundant biodiversity which is available in every region.

With ignorance a large number of plants that we see around are termed as 'weeds'. There is need for rethinking and redefining the term weed. They are not unwanted plants. Weeds are the plants whose use and potentials are not known to humans. With awareness, research and sharing information on these ‘orphan crops’ we can reduce pressure on the main staple food crops and solve the food crisis.

Let me share my experiences on some underutilized crops from Bhutan. To begin with, Slippery gourd or Cyclanthera pedata which is not only an excellent vegetable but also has lot of nutrition and health benefits. Though the origin of this crop is Andes, it is very popular in Bhutan and the Himalayan region.

To know more about this underutilized crop visit  http://www.cropsforthefuture.org/2011/10/cyclanthera-pedata-from-the-andes-to-the-himalayas/ 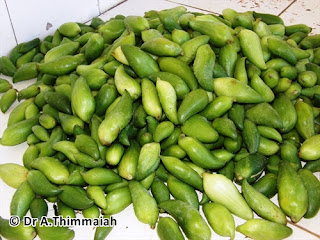 Posted by Dr.Thimmaiah at 3:58 AM 0 comments

Dr.Thimmaiah
Dr. Thimmaiah is an expert in regenerative agriculture, agroecology, rural development, traditional food and agriculture systems. He lives in Fairfield, Iowa, US. Thimmaiah has advised projects in 10 countries across Asia, Europe and the Americas. He has worked with Governments, United Nations, International organizations, Agribusiness corporations, non-governmental organizations, and farmers associations in systems of regenerative agriculture and agribusiness. He advised the National Organic program of the Royal Government of Bhutan for 6 years to transition the Himalayan Kingdom to organic and carbon neutral. He serves in the board of several international organizations. Thimmaiah has published several papers in reputed international journals, written books and presented numerous talks at international conferences/events. Linkedin Profile: http://www.linkedin.com/in/athimmaiah thimmaiah@regenerative-agriculture.net